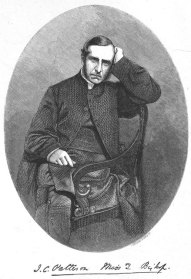 Greetings, everyone. Today’s blog continues our series on the History of Missions. For this week’s blog, we find ourselves in the South Pacific in the 19th century. Today I want to study the missionary John Coleridge Patteson (1827-1871). He was the first bishop of Melanesia, an area encompassing many islands between the Equator and the Tropic of Capricorn (Tucker, 210, 228). Patteson was ordained a priest in the Anglican Church and then went to New Zealand in 1855 at the suggestion of his mentor George Selwyn, bishop to New Zealand (Tucker, 228). Patteson arrived and found a vibrant, successful ministry in New Zealand, but soon colonization began to injure the mission (Tucker, 228).

Ruth Tucker observes that “by 1870 there were seventeen Europeans to every three Maoris.” The land was only so large and the more European colonists arrived, the more restricted the native populations became (Tucker, 228). The younger generations began to become very suspicious of white settlers due to these factors and many of them walked away from the Christianity that had begun to take root in New Zealand. However, Patteson had a different idea for how to minister to the area of islands as a whole. He sailed around and recruited native young men to join the missionary training area in New Zealand, so that once they were educated, they could go back to their native islands to evangelize (Tucker, 229). Patteson was a gifted linguist, learning many of the languages and dialects, which in turn allowed him to become more successful (Tucker, 229). He would often personally accompany the young boys back to their home islands after they were educated to help them become established missionaries as well as recruit new students (Tucker, 229).

One may say that Patteson understood the native/ colonist dynamics very well, seeking to train native young men to be missionaries to their own people. His actions illustrated a knowledge of the rampant distrust for white colonists among native peoples. However, he was to run into many more obstacles in his future missionary work, notably the problem of “blackbirding.”

Tucker observes that the growth of cotton and sugar plantations in the South Pacific led to a need for a larger workforce. Unfortunately, a kidnapping/ slavery industry developed in response. Usually young men and boys were kidnapped, but often they were tricked into going with slave traders. This practice was known as “blackbirding” (Tucker, 229). One can see why many native citizens would become suspicious of Patteson and his ministry model, worried that he was just another blackbirder trying to trick young men into a life of slavery. Tucker notes that over 70,000 young men were ripped from their homes in the blackbirding trade (Tucker, 230).

The widespread kidnapping of young men basically signaled a death knell to Patteson’s ministry, as suspicion and fear spread. In 1871, Patteson went to Norfolk Island to preach and gather more young men to come to his school to be trained as missionaries. However, after going ashore, he never returned. His ship, The Southern Cross, sent a couple of native boys who were on board inland to find out what had happened. They found Patteson’s body in a canoe with five wounds, which represented five men who were stolen from the tribe by blackbirders (Tucker, 230). Patteson’s life was given for his ministry, but his death brought worldwide attention to the blackbirding trade and helped to end it (Tucker, 230).

Overall, Patteson represented a faithful missionary who employed a creative model in his ministry. His goal of training natives to evangelize their own people proved rather successful. However, the fact that he brought the natives to a specific location, often on a separate island from their tribe and family, coupled with the blackbirding trade, brought about his death. Despite the fact that Patteson was such an outspoken critic of blackbirding, he was ultimately blamed for it and paid for it with his life. We can always debate whether or not Patteson should have set up training centers on each island he visited; however, his perseverance showed that he was genuinely interested in simply evangelizing and educating the natives with whom he worked.

I would argue that Patteson was simply a victim of his own historical context. Had the blackbirding trade never developed, perhaps Patteson would have been able to keep serving the islands in the South Pacific. However, his death did bring about a renewed interest in the South Pacific region for would-be missionaries (Tucker, 230). Something else that stands out from Patteson’s ministry is his devotion to his ministry. He knew that mistrust and fear were spreading throughout the region, yet he continued to not only be an outspoken critic of the blackbirding trade, but he continued to operate his ministry as he had before.

John Patteson is thus an intriguing figure to me. Stubborn missionaries are not hard to find in studying the History of Missions, but what is striking is Patteson’s willingness to essentially walk into a situation that he must have known could lead to his death. The dedication to his ministry and his heart for the native peoples in the South Pacific demonstrate faithfulness and a strong calling. I wonder if it were me, would I have left. Would I have at least changed how I ministered? Should Patteson have done so?  What do you think? What is Patteson’s legacy? Should we ultimately see him as “successful?”